Yesterday Amazon released a new Cloudfront API that returns partial AWS account ids and Cloudfront distribution ids associated with some given domain name, to help you determine which of your own AWS accounts serves traffic for that domain.

In Cloudfront, a domain alias can only be associated with a single distribution globally across all AWS accounts, and for companies that have a lot of assets it can be difficult to track down which account owns a given domain - this API helps solve that problem. Of course it would be problematic if we could lookup account ids (even partial ones) for arbitrary websites, so to help protect against this information leakage Amazon requires you to have a valid TLS certificate for the domain name you want to query. This is called out in their documentation:

To list conflicting aliases, you provide the alias to search and the ID of a distribution in your account that has an attached SSL/TLS certificate that includes the provided alias.

As it turns out it’s possible to completely bypass this restriction, because ACM has a bug that lets you import certificates without a valid private key.

And the result is a leaf certificate, intermediate certificate chain, and private key that ACM will happily let us import:

Now that we have a “valid” TLS certificate, we can create our own cloudfront distribution with the certificate attached and use the new list_conflicting_aliases API: 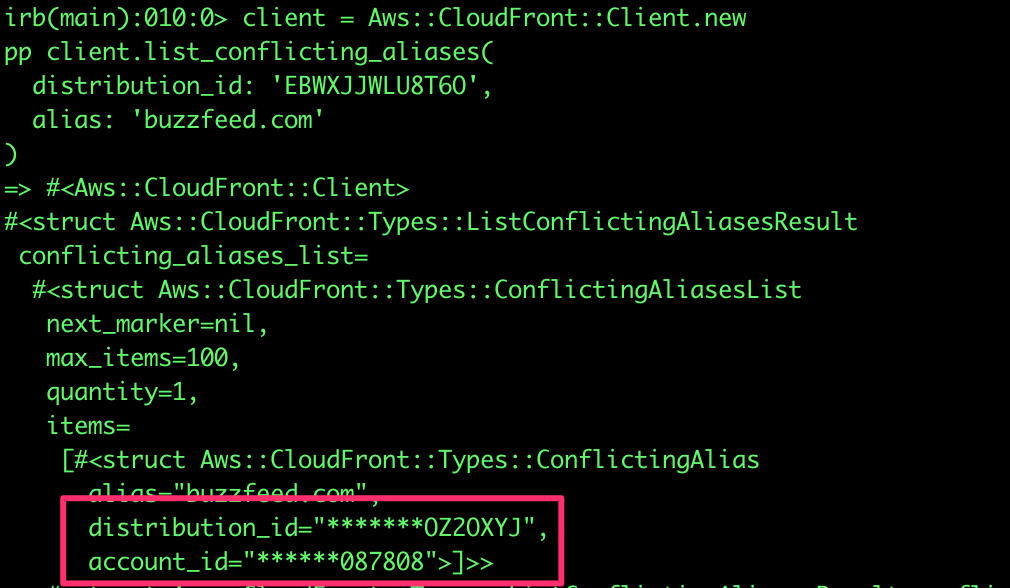 I actually reported this issue to Amazon several years ago, in February of 2018, but received the following response:

Thank you for bringing your security concern to our attention. We greatly appreciate and encourage reports from the security community worldwide. We do not believe the behaviour you describe in this report presents a security concern, rather, it is expected behaviour. The import process checks to see that the attributes match up - if you edit them as described, they appear to match and so can be imported. They will fail in use though as it is not a valid public/private key combination, which is not only expected but desired.

Can you share more information about why you think this is an issue?

If you discover or become aware of other security concern specific to AWS products and services, please do not hesitate to contact us again at aws-security@amazon.com

We had some more back and forth but ultimately they declined to fix the bug. In their defense it is not possible to use this fake certificate to intercept traffic, and up until yesterday there was likely no real impact to this bug.

edit (8/10/2021): AWS has now fixed the ACM certificate import bug! If you attempt to import a mismatched certificate and private key you’ll get a Passed PEM could not be parsed error.

I originally learned about this private key trick from Hanno Böck’s blog post, How I tricked Symantec with a Fake Private Key. I learned about this new Cloudfront API and the TLS certificate restriction from a conversation on Scott Piper’s cloudsecurityforum slack group.